Leonid Afremov was a Russian-Israeli artist belonging to the Neo-Impressionism of the second half of the 20th century. He is best known for his palette-knife oil on canvas works, and for his unmistakable style. Active between 1975 and 2019, he worked in the Soviet Union (Belarus), Israel, the U.S. and Mexico.

The element that can somehow illuminate Afremov’s artistic career is undoubtedly to be found in his continuous research for a freedom of expression, which the painter has barely known for most of his life.

Afremov was born in Belarus in 1955, when the country was still part of the Soviet Union, in Vicebsk, in the same district where Marc Chagall had been born less than a century earlier. Here he graduates in Arts and Graphics with full marks, but his art finds no chance to emerge. And he himself does not find acceptance within the artistic circles of the city, due to his Jewish origins.

In search for economic security for himself and his family, and in the hope of finding a less hostile environment, he moves, during the years of the Russian emigration, to Israel. Here his hopes are soon crushed: in Israel the artist suffers a new form of discrimination, for which he is just a “Russian immigrant”. As a result, he is shut out from the artistic life of the country. Afremov is forced to sell his works to local art dealers for very little money, just to see then the same works sold at incredibly high prices, without even receiving any form of recognition or appreciation. To give an example of the persecutory acts suffered by Afremov, it is sufficient to remember that his gallery, established with great sacrifices, was vandalized and most of his works destroyed. Very little remains of Afremov’s production of those years.

Continuing his quest for safety and freedom of expression, Afremov moves to the U.S. Here he is exposed to good opportunities, and takes part in various events coming into contact with the environment of American arts, over which he is soon deeply disappointed. During his stay in America, thanks to the resourcefulness of his son Boris, Afremov decides to exit the traditional art market and to sell his paintings directly through Ebay. From this moment on Afremov’s success begins to be international.

Eventually, in 2010, he decides to move to Mexico. Here he establishes his studio and finds finally freedom of expression and financial security. It is in this moment that the decision to pass his technique and poetics onto other artists matures. In the last years of his life he forms several local painters to whom he entrusts the reproduction of his works, with the idea that his art must outlive his own life. At present “Afremov Studio” is fully running, with the mission to fulfill Afremov’s desire for non-elitist art, an art for everyone, an art that can also be approached economically, capable of entering every home and enlivening it with the colors of his very particular style.

Leonid Afremov dies in Playa del Carmen in 2019, suffering from a heart attack.

When we think of the Impressionists of the second half of the 19th century, we imagine these young artists with their country easel on their shoulders ready to fix on the canvas, with quick strokes, the impressions that the changing light of the scene gives them. Afremov, far from the disputes of the early Impressionists, takes from them a good deal of elements: the immediacy and subjectivity of painting, and a strong sense of attraction towards light. Afremov did not paint en plein air but used photographs taken by himself during his many travels. Hence, his paintings generate from impressions which the artist recalls and immediately transfers onto the canvas. In this perspective, memory, and its re-elaboration, becomes a means through which the photographed scene is transcended and translated into Afremov’s pictorial language, into his own vision of life. Afremov gives to the scene in the photograph a new life, lit up through a profoundly emotional and intimate impressionism.

It is no coincidence that several psychologists and psychiatrists have declared the therapeutic value of Afremov’s art, in conveying a sense of peace and calm, useful in the treatment of disorders such as anxiety and depression.

Afremov’s art is an explosion of light and color that attracts the observer from the very first encounter. It is an art that presents itself as an absolute celebration of life, both internal and external. Just behind the land or seascapes we find the true protagonist of his art: human sentiment. As soon as we allow ourselves to dive completely and without prejudice into the painting, we are greeted by a gentle and benevolent world where everything, the general composition, the use of color, light and perspective is functional to the dominant message of Afremov’s art: life is nothing but a continuous “feeling”. From this “feeling” the painter invites us to take nourishment. He asks us to cultivate and follow it in order to become free, alive, happy beings.

Afremov is the artist of light, who creates his works with incredible immediacy: the artist rarely sketches the scene on the canvas, not even the essential points of the composition, preferring to start painting large spots of color “alla prima”, vigorously using his palette-knives, and starting from lights. The rest of the work is built with immediacy and great expertise. The artist adds gradually lights, shadows and reflections, and finally moves onto human figures and details. This demonstrates the Afremov’s great competence in the theory and use of colors, but also a great ability to translate the photographed scene directly onto the painted scene. Afremov’s painting technique is free, immediate and fresh. Watching Afremov while he paints is an exciting experience: it is an art that slowly grows on the canvas. Only the artist sees the scene in his mind while spots of color begin to appear on the canvas, only the artist knows when the scene is complete. It is a wonderful journey into emotion.

An art that can surpass simple admiration, and speaks directly to our most intimate part is a great art, and in this perspective we invite you all to take a stroll in the Afremov’s colors. 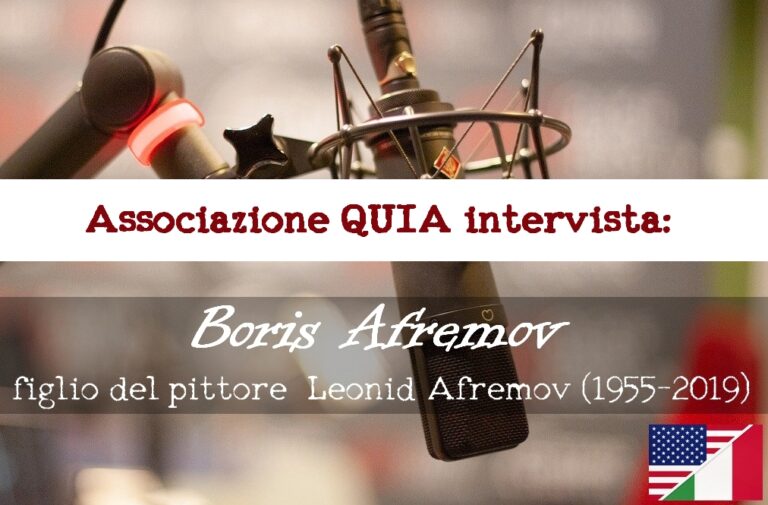 © All rights reserved. Unauthorized copying and reproduction of images and texts forbidden. If you wish to share the content of the page you may do so by sharing the page through the tools at the bottom. If you wish contact us or to report any unauthorized use of this page and its content, please do so by contacting Associazione Quia through: